Handcrafting in the Archives with Knit British 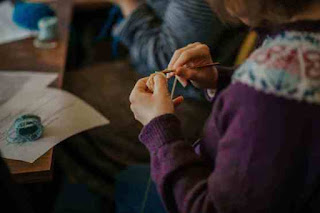 All images credited to Mihaela Bodlovic for Festival of Creative Learning,University of Edinburgh

In February this year, I sat in the middle of a horseshoe of tables in the library at the School of Scottish Studies Archive, exploring with workshop attendees just what ‘cleeking’ may be.  Neither knitting nor crochet or nälebinding, we were working from letters and magazine articles from the 1950s which – like us – were focused on saving a handcraft from being lost.

All this began in Spring 2018, when Louise Scollay of the Knit British podcast, contacted me to ask if I was interested in drawing on my practice in crochet to help investigate a mystery…  Hooked (ahem), I happily agreed and opened up a document that had kept us both intrigued since.  Louise has a detailed archivist’s and handcrafter’s insight into the amazing set of papers she came across during her day job.  The story of her discovery of letters and patterns related to Scottish Home and Country -  the Scottish Women’s Rural Institute magazine of the 1950s and the research journey she has taken since is now the focus of a Knit British podcast episode.  I recommend that you settle down with a cuppa to listen here.

In a nutshell, Louise found a collection of letters and cuttings in a box of ephemera in the archives.  Dating from the early 1950s, these referred to a letter published in the SWRI magazine (the original  eludes us) asking if other members knew much of the craft of ‘cleekit’ or ‘cleekwork’ – a craft at risk of becoming lost as the generations of men who traditionally took on this work were passing.  Descriptions of the stitch followed in respondents’ letters, along with a pattern in the magazine instructing members how to make a glove.

It was this pattern which I got to investigate.  In its 1950s fashion, this assumed much tacit knowledge about handcraft in its instructions and was also without images.  Using what I knew of crochet, I began to experiment with a gesture similar to a crochet slip stitch or other flatloop handwork: with the yarn and hook both held in the same hand (there is variation in the letters) the head of the hook slips into a single loop stich, catches the yarn and is pulled through,

My swatches initially were disastrous – using 4ply wool, I needed to go up to a hook size of 5.5mm or 6mm to create loops big enough to work into.  I found myself wishing for a smaller, more pointed hook to work with (more of that anon) but pressed on.  Over a few weeks, a somewhat misshapen glove emerged (yes, the index finger is too long – don’t @ me). 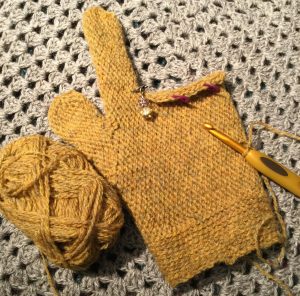 The fabric which emerged was fascinating.  In working into either the front or back loops of the cleek stitch, a ‘horizontal’ rib similar to knitted stocking stitch or a ‘vertical’ knitted garter bump surface was created.  Despite it being in lofty Jamieson’s Spindrift 2 ply Jumperweight, this was a dense and incredibly warm fabric – ideal, in fact, for hard working garments which had to withstand wind and rain:  It had little give on its axes, but a decent stretch on the bias.  The references in the letters to these being produced by rural village glovemakers made absolute sense.

Louise spoke about her archive find, what she had learnt of the handcraft and the making of the glove at the In the Loop conference in Summer 2018, but the ‘cleekit’ bug had caught us both.  Over the next few months, she shared with me new findings of articles and letters which described a widespread practice of cleeking from the Scottish Borders to the Western Isles.  She discovered images of cleekit hooks - answering my desire for a narrow hook with a pointed head – and we both searched archive collection records for references to the craft. 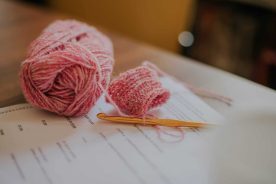 Louise found further SWRI letters and a photograph from a later issue of the magazine of a member’s delicate reproduction of the glove pattern; I found a listing in the National Museum of Scotland which had Cleek or cleekit listed variously as kitchen spit ironwork, golf clubs and shepherd’s crook, but nothing as small as a hook to hold in the palm.  Coming up with limited results, we wondered whether artefacts and fabric swatches may be misclassified in archives around Scotland, considering its visual similarity to knitting once the cleek fabric had been worked.  Certainly the small hooks – made it seems from repurposed broken materials including combs and toothbrushes, may have simply been thrown away. 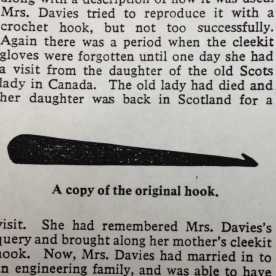 In a wonderful opportunity facilitated through the University of Edinburgh Festival of Creative Learning, Louise secured funding to run a workshop on cleek work and celebrating how handcrafting in the archives could bring collections to life for makers in the 21st century.  In a fully booked (yay!) event, attendees were introduced to the incredible potential that the School of Scottish Studies Archive holds, had a glimpse of the varied materials on textiles and handcraft held there, such as songs sung by the women who waulked tweed or composed by spinners working alone at home and heard about the incredible story of how the discovery of papers in a box file had developed (listen to Louise’s talk here).  I had the delight of teaching attendees how to ‘cleek’ a sampler wrist warmer. 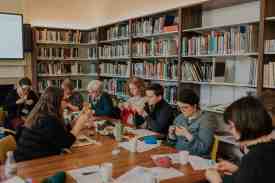 The intention of bringing the archive to life through exploring the story of cleekwork and learning the handcraft technique came to pass in ways that far exceeded our hopes: The group began to speak through different interpretations of instructions, considering ways to hold the hook, how that hook may be personalised to fit the maker’s hand … and excitingly, how to form the stitch in different ways.  One attendee in particular experimented by drawing the stitch down and towards himself rather than pushing into the fabric (all thanks to a conversation about Japanese philosophy, thanks Stevan!).  Experimenting with these ideas created a different surface fabric – more dense and patterned with slanted, crossed stitches like herringbone.

Our investigations continue: Participant Stevan sent us a cleek hook whittled from a piece of firewood at home, along with a link to a 1981 Crochet World magazine (p.60) which, like the SWRI in the 1950s, was concerned about the handcraft practice of what it described as ‘Highlander Crochet’ becoming lost. My fingers are itching to get into the textile collections of Scottish museums in search of misattributed cleekwork amongst the archives… for example, might some of the 206 items related to crochet in the National Museum in Edinburgh perhaps be ‘cleekit’ instead?  Louise has discovered more related letters and is hoping that the SWRI may have an accessible archive to explore.  It feels like this work may be the latest iteration of a determination to find out more about this lesser known handcraft. 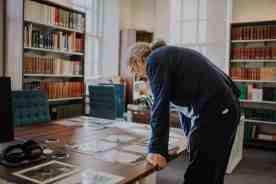 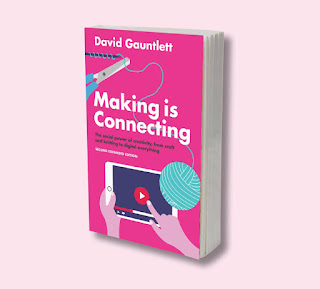